Everything you need to know about Cryotherapy! We will explore what Cryo is, what are the scientifically proven benefits, and where to get a Cryosauna or Cryochamber session in Thailand. 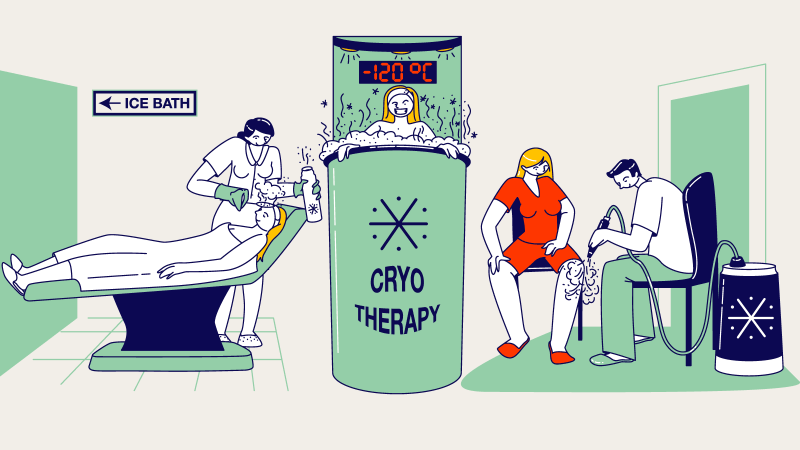 Cryotherapy, or just Cryo, is a treatment that has been used in the medical field for a long time. Modern cryo comes in the form of a Cryochamber, Cryosauna or localised jets of ice-cold air.

Cryotherapy treatments can be performed independently or combined with other treatments like acupuncture and physical therapy.

Cryo is marketed as an alternative treatment option that relieves pain and inflammation.

Interestingly, you can use it externally or internally. So, if you are interested in learning more about Cryo, then keep reading!

This post will cover what cryotherapy is and how it works.

We will also discuss the various Cryo machines used in this kind of therapy, covering the positives and negatives.

Finally, we will talk about the risks and side effects that some people may experience with cryo.

Cryotherapy is the act of using ice or cold materials to help ease pain and inflammation.

Exposing yourself to the cold has been proven to have many benefits when done safely.

The most common way for administering cryotherapy treatment is by putting an ice pack on the affected part or dipping it in freezing water.

And we all have done this in some measure for one bodily issue or another.

Hippocrates was the first documented person who felt that “cold can relieve pain” thousands of years ago. This idea has been revitalized in recent decades.

Various scientific studies have shown how “cold” helps to give relief from ailments, such as headaches, migraines, and more severe problems like arthritis.

There are two forms of cryotherapy used for different reasons. Healthcare providers employ the first method using extreme cold to freeze and subsequently destroy the abnormal tissue. In addition, the practitioners may use argon gas, liquid nitrous oxide, or liquid nitrogen to create a cold-like condition.

The first form is used in many types of treatments; chief among them are cryosurgery or cryoablation.

The latter uses liquid nitrogen locally to destroy the abnormal cells and is used to treat a tumour or cancerous cells.

The second cryotherapy form is Whole Body Cryotherapy, or WBC for short. It is used to help in injury recovery and other conditions such as arthritis. There are many athletes worldwide who employ the second form to get relief in their sports injuries.

How Does Cryotherapy Work?

The basic principle behind cryotherapy is that it works how ice packs work against swelling and pain.

Studies show Cold Water Immersion, CWI, is just as good if not better than Cryo

Some claim that Whole Body Cryotherapy can treat signs and symptoms associated with asthma, arthritis, chronic pain, depression, and more.

In addition, it may also prove useful in weight loss and improving metabolism. But these claims are mostly exaggerated by companies.

If you want to experience cold water immersion, sign up for one of our Wim Hof Method workshops in Thailand.

People trying to popularize whole body cryotherapy claim it to be an effective recovery and rehabilitation process. However, the scientific fraternity is divided as the studies have mixed results. For instance, a German study saw a boost in recovery in endurance athletes under observation for cryotherapy in 2015.

However, in the Cochrane review, the results of the last four studies were pooled, but they showed insufficient evidence in support of the cold therapy.

At the same time, the researchers said that the treatment method has great potential.

Therefore, we dedicate this post to understand cryotherapy a little deeper by looking at the various devices used to administer the amazing therapy.

There are mainly three types of machines used to provide cryotherapy to those who need it, namely,

Let us explain each machine in more detail.

The first type of Cryo treatment machine is a Cryosauna. The tube shape with your head sticking out.

It is an advanced machine that lowers the body temperature evenly within a span of one to three minutes after an individual enters the machine.

A sizable number of clients, especially athletes, prefer nitrogen-based Cryosauna. The reason lies in its ability to lower the temperature up to -140°C.

The low temperature is claimed to be highly beneficial in muscle recovery and pain relief in sportspeople.

It helps in reducing aches and improving stamina besides the quality of sleep post-first session itself.

A cryosauna is like a sun tanning bed, but it is kept upright. While the body stays inside the bed, the head stays out of the machine. That is why it is also known as partial body cryotherapy.

Cryosauna machines can accommodate a maximum of one person only and are filled with liquid nitrogen. Though the gas surrounds the neck downwards, it can still impact the head for maximum effect.

Cryosauna is said to reduce the body temperature safely and increase adrenaline, endorphins, and oxygen supply.

A Cryochamber is an enclosed room or chamber and uses a hybrid system that combines electricity and liquid nitrogen, nitrogen gas, or some other cooling power.

The low-temperature treatment can reduce inflammation and pain.

It is said to provide benefits such as reduced inflammation in joints, improved circulation throughout limbs, and higher energy levels.

Further, unlike cryosauna, cryo chambers can support more than one individual at a given time.

When you step into the cryo chamber, your body faces extremely low temperatures as low as -160°c for a few minutes, and then it is back up again.

During this time, you are recommended to stay inside for a minimum of three minutes.

The dry cold air seeps into the skin, making the nerves (responsible for detecting cold temperature) send signals to the brain about the death-like situation.

This stimulates a fight for survival response in the body.

Your brain sensors, sensing all that cold air, causes blood to flow to the torso to protect all the vital body organs.

Then, after the temperature is raised, a lot more oxygenated blood rushes back into the vital organs and helps them with healing.

Whole Body Cryotherapy treatment may be great for generalized inflammation, but there are moments when particular parts of the body require more attention than the other.

Doctors and therapists can provide localized cryotherapy to patients in multiple ways, such as ice packs, ice massage, coolant sprays, and more.

It is one of the go-to alternatives for reducing inflammation or relieving aches & pains, curing injuries like strains or pulled muscles.

Before the treatment, the target area is checked for temperature and is constantly monitored until it is brought to the healing point.

The therapists constantly monitor the skin temperature and keep communicating with you to ensure a comfortable experience throughout.

The treatment causes the skin vessels to constrict to reduce swelling and inflammation in a specific affected area. After the cryo treatment is over and the body temperature rises, the cold, numb areas receive blood flow back. This process helps with a broad range of motion.

Localized Cryo can be given to most body parts such as ankles, feet, knees, shoulder, elbows, and neck and is administered directly to the affected areas for pain relief.

Before you try out any form of cryotherapy, speak to your doctor. You should not attempt it if you have a pacemaker or a history of high blood pressure, stroke, and more. There are many dangers involved with such conditions; therefore, you should abstain from taking this therapy.

However, if you still want to give cryotherapy or cryosauna a try, then be sure to consult your physician before trying out anything.

Each session lasts only minutes at most. Also, even if you are healthy, take someone along for supervision.

Side effects of Cryotherapy

Your cryotherapy may leave you with aftermaths; chief among them are:

Cryotherapy is the use of colds (extreme) to enhance athletic recovery and reduce inflammation.

It was first used in Japan but has become more popular as a treatment option for various medical conditions, including arthritis, carpal tunnel syndrome, muscle spasms, chronic pain associated with cancer, or other diseases.

If you seek relief from your aches and inflammations without medications or invasive treatments, you may consider cryotherapy. It may or may not heal it completely, but it will certainly help you get some relief.